Actually, I Was the Real One 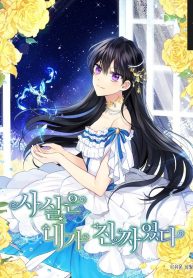 I Am The Real One

In order to receive love from her father, Keira tried her hardest to live the life of a perfect, submissive daughter. However one day, Cosette appears claiming to be his real daughter and Kiera is executed under the assumption that she is a fake. In the last moments of her life, Cosette whispers to Kiera “Truthfully, you were the real one”. Kiera, recalling those words, returns to the past. Although revenge is important, what does it matter who is fake and who is real? Now that I have been given a life again, I will live it freely for myself! A cute female protagonist’s coming of age romance who has never made friends. A coming age of romance of a cute female protagonist who has never made friends. I Am The Real One / Actually, I Was the Real One / 其实我才是真的 / 사실은 내가 진짜였다
Show less
Show more

Register For This Site.

Please enter your username or email address. You will receive a link to create a new password via email.