This Is An Obvious Fraudulent Marriage 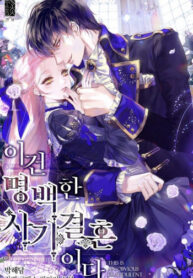 The Sophen country had been destroyed by the empire. The sole daughter of a count family, Leylin Efran, had to find a husband to be able to inherit her family. So she wouldn’t have to suffer through loveless marriage, Leylin decided to find a husband to have a one-year contract marriage with. In the middle of her quest, a young and dashing man appeared before her. Leylin was convinced this is the right man for her, but is he truly the answer to Leylin’s perilous situation? I Was Tricked into this Fake Marriage! / This Is an Obvious Fraudulent Marriage / Igeon Myeongbaekan Sagigyeolhonida / Aku dan Pernikahan Palsu / これはまぎれもない結婚詐欺ですっ！ / 骗婚也要得到你 / 이건 명백한 사기결혼이다
Show more
Show more

Register For This Site.

Please enter your username or email address. You will receive a link to create a new password via email.